Natasja & I are a good pair – we always have to be 'doing something'. Therefore, I haven't sat down to write this post because… we just don't sit down! ( See ironic photo of us sitting & being photobombed, below)

Natasja has done 3 fantastic things to prepare for my arrival:

1- She bought me a Tram pass. 2- She borrowed her friend's museum pass that gets me in free! 3- She RENOVATED the attic/ laundry room into a bedroom!!! (Ok- that wasn't JUST for me.) She also has a kitty who reminds me of my kitty, Sula! That is Nina in the basket. What a sweetheart!

I arrived Friday & Natasja met me @ the airport! It's so nice to see a familiar face @ baggage claim! Then she whisked me home (via tram) and let me get settled & freshened up after my flight. (I'd swear that the seats get smaller every hour!). Then we had a 8 minute walk to the Museumplein where there are 3+ spectacular museums & a concert hall. The Rijks museum has been in constant renovation for 10 yrs but opened earlier this year. The 'I AMsterdam' artwork out front is a crowd pleaser, those huge tinfoil sculptures… Not so much. 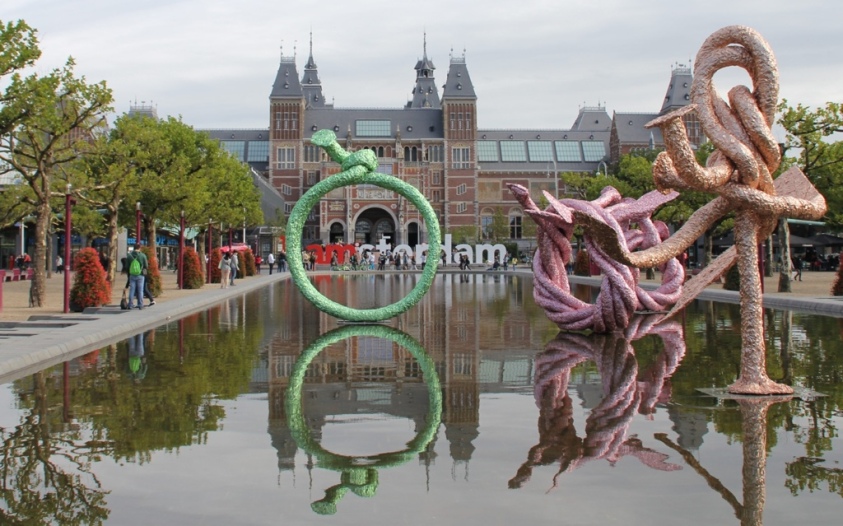 We decided to head to the Modern Art Museum – which ALSO had just finished a renovation (which looks like a huge bathtub.) The photos below; Natasja heading into the Stedelijk- the bottom of the 'bath tub is in the top left corner. I'm pleased that we don't look like the walking dead since I had 2 hrs sleep on the plane the night before & Natasja had finished her shift @ the ER at 8am that morning, the picked me up @ the airport! It was the never-ending day.

(On lower-right: Mondrian). After the museum we headed home to make dinner, from the ingredients we had purchased @ Albert Heijn (a grocery store with hamsters on their ads who 'gather the savings' for you! Adorable!). Natasja made STAMPPOT- which is mashed potatoes with stuff stirred in, arugula/Parmesan cheese/nutmeg. We ate it with little fake meat pieces b/c Natasja has been a vegetarian since her trip to the Ashram in India. Om.) Then, we slept like rocks until morning.

Each day ended up having a theme that just arose organically from our daily adventures. Day 1= The day we can't go to sleep, Day 2= Bitterballen Day, Day of the Drag Queens, Buttocks Day… Etc. We were just calling it like we saw it. 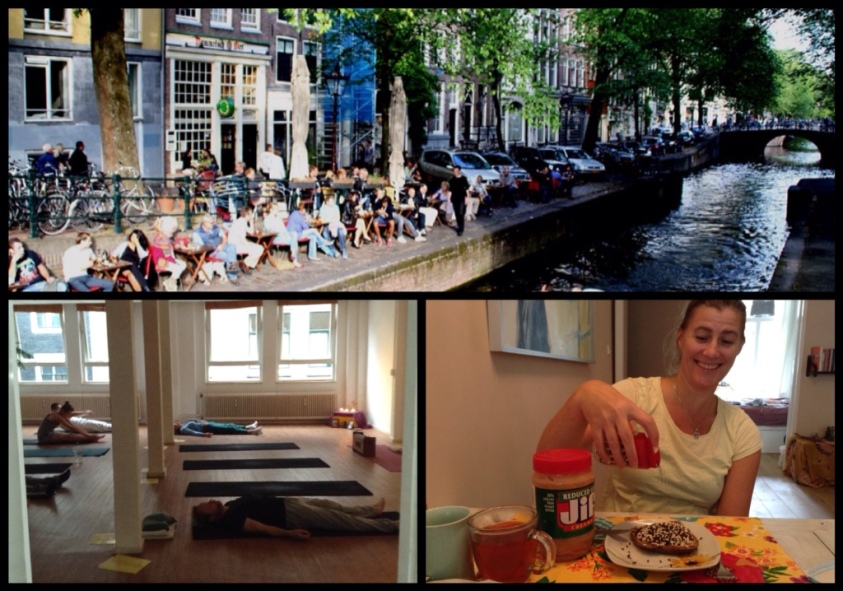 The next Am, we went to yoga class, taught by an adorable American named, Susan. She played the harmonium, chanted for us, gave us Celestial Seasoning tea AND complimented my tri-pod headstand. Plus she gave great hugs, so I knew we'd get along famously. We stopped back home to change & grab lunch. Natasja let me try her 'dessert' sandwich – JIF peanut butter with chocolate sprinkles. She assured me it was very Dutch & very tasty. For snack she promised to find me a Bitterballen, a fried ball of beef & mushrooms that is crunchy on the outside and gooey in the middle- a real Dutch food! But first, off to THE PALACE!

The palace is huge & spectacular- with a free audio tour, all for $13US. Napolean's brother was in charge for a while & lived in the palace. All the Royals after France left were introduced from the balcony, Which have mostly been Queens with interesting names.. Willamina, Beatrix and now King Alexander-Willhelm. The sculptures inside were detailed & intense- especially in the justice-related rooms with lots of serpents & skulls. Every inch was covered with carvings- the floor is inlaid with a huge world map. Let me tell you, all that Michigan coastline really threw off the royal topographer! 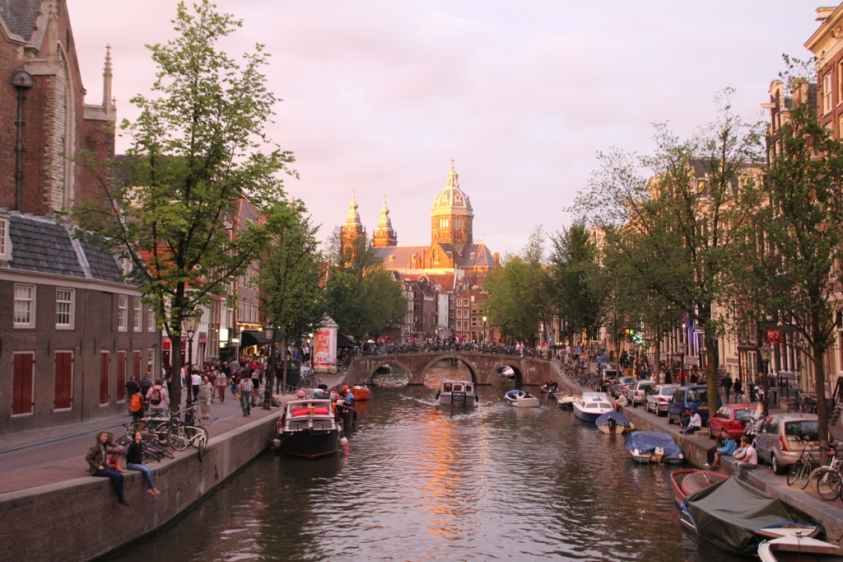 From 'The Dam Square' (the river used to to through the center of town to transport goods) we hopped a $12US canal tour. There was only a Cap't, 50 tourists and a recording, repeated in multiple languages. Next time I'll spring for the tour with a real guide telling you stories about the 7 bridges & cool churches (see above). Afterwards we popped over to 'De Waag' or weigh house. It was finished in 1665' is the oldest building in Amsterdam. It lies on the square of the New Market area – a huge center for goods to be purchased. We wanted to purchase some Bitterballen! We had struck out at the fast food shop where there are tiny heated cupboards that you open and pull your snack out. They are like old school vending machines that cover a wall.

Here is a postcard I bought that shows them full of 'Delfts blauw'- the distinct blue- glazed pottery the Netherlands is famous for.

In De Waag there is a restaurant where we finally found the most Dutch foods! On the plate above,you'll see a soft cheese, bright yellow pickled onions (Amsterdamse uitjes), spicy mustard, fried cheese sticks, and BITTERBALLEN! Next to them is liver bologna, which tasted lovely with the mustard. Finally! I ate like a Dutchie! De Waag is not just famous for its Bitterbollen – it is also a place where REMBRANT PAINTED! It is fairly amazing to have had snacks in the same building where a super famous artist hung out and painted!

That night we had gelato- my favorite flavor had been Straciatella. But that night I discovered Arianna… Which is Straciatella with nougat! Love! Then, I proceeded to drip it all over myself and Natasja said, “I can't be going with you, anywhere!” Which is the Dutch version of ” I can't take you anywhere!” It's just a small world, right?

The next day we go to see VAN GOGH! But we'll save that for the next post.