When I last left you, Dad and I were driving west after a SUPER FUN 3-day weekend in Colorado.

1- We drove along the train tracks a lot and dad always counted the number of engines. NINE was the most we ever saw, 5 in the front and 4 in the middle of a very, very long coal train.

2- We were super excited to see the Columbia River Gorge! Yay WATER!!!

3- We stayed at a dirty Motel 6 in Boise but it had custom bedspreads!

4- When we’d drive thru a tunnel Dad would say, “Shields up!” And we’d slide our sunglasses up. (You’ll have to imagine the pix of that one…) 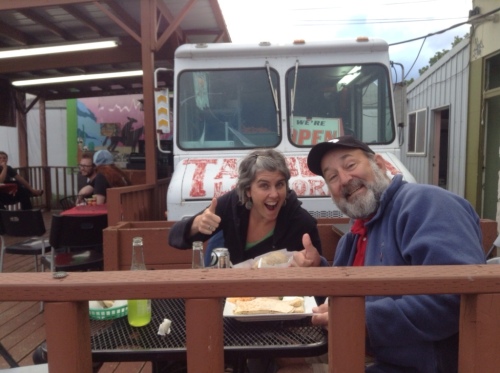 When we arrived in SE Portland Erica wasted no time & initiated us into the food truck fan club! Thanks, Erica!

Now for all the (well-deserved) nicknames.

CLOUD CITY: The first few days it seemed to rain every morning, then every hour after that… but just for a while. I have been told that this does not qualify as rain and only tourist carry umbrellas.

PDX: This is the airport code and gets used a lot in web addresses.

BRIDGE TOWN: Portland is divided in 1/2 by the Willamette (Will-AM-IT…rhymes with dammit) river (N-S) and there are a whole mess of bridges to get you from one side of of town to the other.

CITY OF ROSES: Wiki says: In 1917 a group of Portland nurserymen came up with the idea for an American rose test garden. Portland had an enthusiastic group of volunteers and 20 miles (32 km) of rose bordered streets, largely from the 1905 Lewis & Clark Exposition. Portland was already dubbed “The City of Roses” so this was leveraged to enhance the reputation.

Jessie Currey, president of Portland’s Rose Society at the time, petitioned for the city to serve as a safe haven for hybrid roses grown in Europe during World War I. Rose lovers feared that these unique plants could be destroyed as a result of the war. Foreign hybridists sent roses for test from many countries and the garden was an immediate success. Today, Portland is the only North American city that can issue its awards to roses of merit throughout the world.

STUMPTOWN: In the 1850’s PDX was growing so fast that they were cutting down trees to make new roads but didn’t have time to dig the stumps out. They just cut them close to the ground + painted them white.

BEERVANA: I thought Michigan had plenty of MicroBrews… but not nearly as many as here! PDX has more brewpubs per capita than any other town! Dad & I went to HOPWORKS with Matt & Emily and I had a yummy Granola Brown. 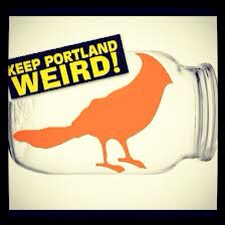 KEEP PORTLAND WEIRD: Dad & I have already met quite a few interesting folk. Like the homeless lady infront of Hopworks who wanted to know if we had eaten any good food in there. Wierd but friendly. Dad kept pointing out the young ladies with florescent pink hair. There are some wild dressers in this town! It keeps it interesting!