Natasja was excited when we found an Irish pub in Prague that served a full Irish breakfast. I was excited because it was called O'Reilly's and made me think of Jessy and John! Eggs, hash browns, beans & toast! 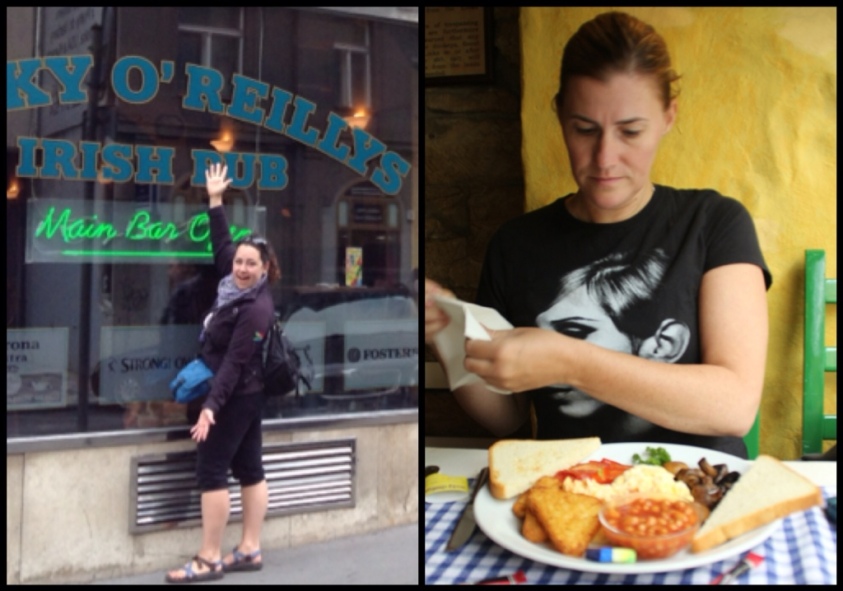 I met a guy traveling in New Zealand, who took photos of the man-hole covers in each town to chronologically document his trip. It's a good idea, so now I do it too! The sign on the right initially freaked Natasja & me out! Were we in an area where people were mugged at gunpoint?!? Nope, someone had used a Sharpie to alter the sign. (But we still haven't figured out what the words say…is that 'N' backwards?)

Off to find Mucha! I must admit that before I'd arrived in Prague I had never heard of Alfonse Mucha. I was definitely a big fan of Art Nouveau art/architecture but I appreciated it more as a genre and hadn't really considered the individuals artists behind the art. Today, that was about to change!

The museum was small, only 3 rooms but it was a great introduction to the life of my new favorite artist. Alfonse Mucha was born in 1860 in Monrovia- the area that currently divides the Czech Republic from Slovakia. He had attended art school in Vienna but hit the big time in 1894 in Paris when he was commissioned to create show posters for the legendary actress, Sarah Bernhardt. He was instantly famous and the posters that accompanied Bernhardt's shows became as anticipated as her next performance.

In 1900, he designed the Pavillion of Man for the Paris World's Fair. In 1906 spent time in New York, doing portraits & looking for a financial backer for a series of 20 enormous paintings depicting the history of his beloved Slavic people. 1910 he returned home to lend his skills to the Municipal House in Prague (below). 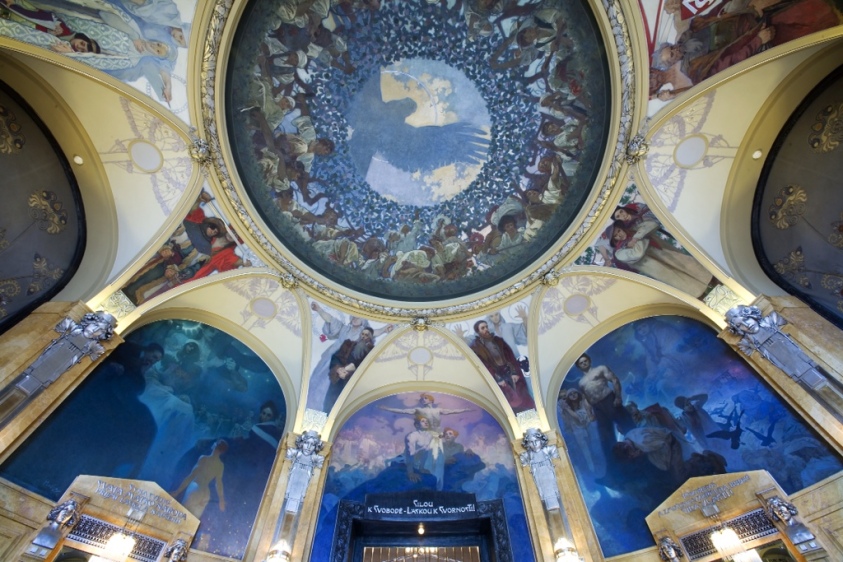 In 1918, after WWI, Mucha designed the money & stamps for the new Czechoslovakia. In 1931, he completed an immense stained glass window for St. Vikus, the cathedral in Prague castle.

Unfortunately, when the Nazi first came into Prague, Mucha's Masonic activity & fame made him a target. He was one of the first people 'questioned' by the Gestapo and died from pneumonia shortly after being released. If you're still reading this you may appreciate Mucha's website, http://www.muchafoundation.org/.

Natasja & I used TripAdvisor to find the best museums & restaurants in Prague, and that night we searched out a tiny place known for their unusual cocktails called the Hemingway Bar. It did not disappoint. It was a small door in a dark side street that opened into a cozy, dark bar. We sat at the bar & Ondrej came over to give us the menu & the Hemingway etiquette rules. Natasja had already broken #5 by talking to the guy next to us, 'Hi! What are you drinking? Are you from Tibet?' Nope, he was Russian… 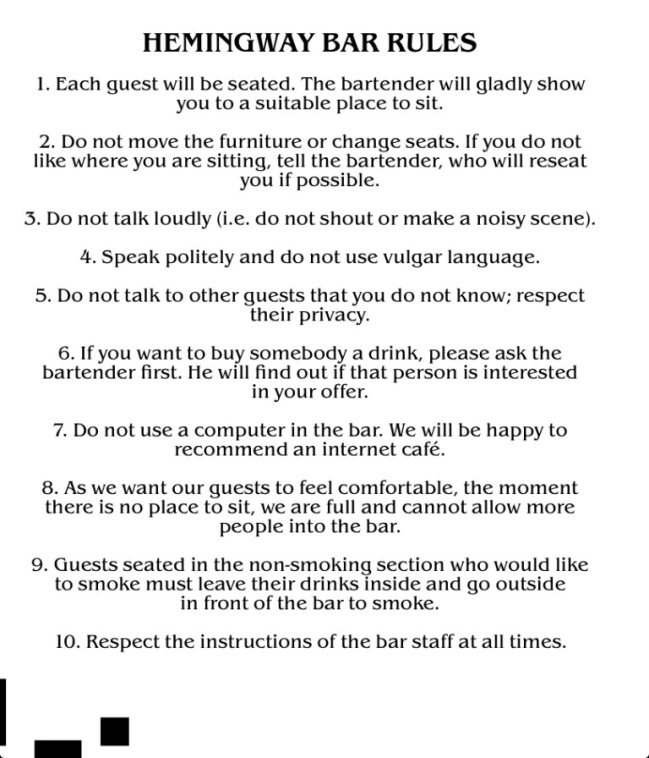 Luckily, the Russian (Danzan) was in town to see the Dali Lama and open to conversations with nosy tourists. By the end of the evening Danzan & Natasja were Facebook friends (breaking rule #7) sharing sips of Absinthe. Absinthe is not designed to be enjoyed straight up, Ondrej explained the process to us.

A small amount of the greenish, anise-flavored liqueur is put in a glass. A flat, slotted spoon in placed across the top of the glass. A sugar cube is placed on the spoon & a steady dripping of water melts it into the glass. It's all very classy. Or maybe it was Ondrej's suspenders that made it classy. We had a great time chatting with our new friends & when we decided to head back to our hostel they were protesting, “Don't go! Stay for one more!” Maybe if we had stayed longer, the 800Kr ticket wouldn't have happened…

Natasja & I are still a bit unclear on why the 15 min metro ticket we bought was not valid. But the facts are clear. We caught the Metro home from the bar and as we exited the escalator a giant, burly man Ina dark blue jacket asked to see our tickets. We proudly produced 2 tickets, and were told that they weren't valid for use in the city center, only the other zones. Arg. In case you'd like a reminder of what those blasted machines looked like… Here! 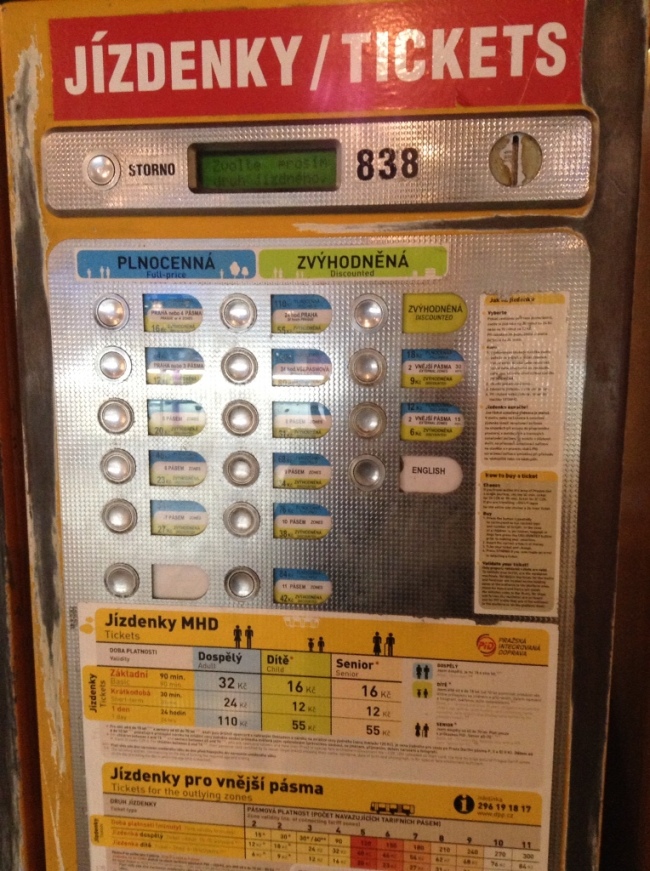 Natasja made a valiant effort and asked the man if we could just purchase the proper 24Kr tickets right now, since it was an honest mistake made by silly tourists. Nyet. He showed us his 'badge' and we were informed that he could give us EACH an 800Kr ticket if we'd rather. No thanks. We made one last plea to not pay the stupid fine but the guy didn't budge. In fact, he pulled out his phone & asked if we'd like him to call the police in to clear up this confusion. This guy was serious! So we paid and fumed back to our room. Thank goodness we had some spectacular new roomies to tell the story to, Priya & Remona! I got up on a chair so they coud get an idea of how big & grumpy the ticket man was! We laughed a lot and Natasja got to tell them her story of bribing a train conductor in order to get to an Ashram in Priya & Remona's country, India. Gotta love making new friends! 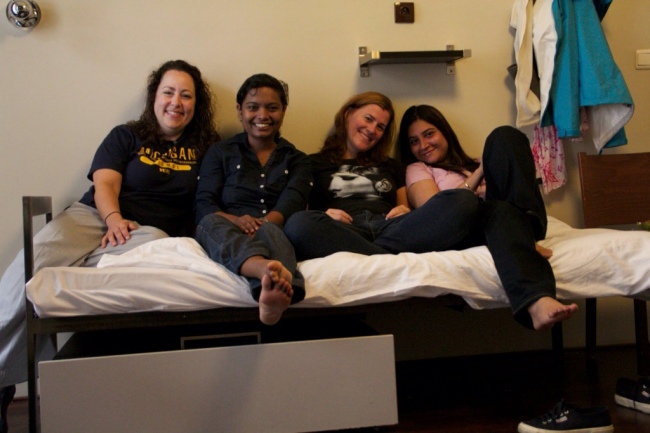