Summer camp is done.  All the post-camp meetings are finished.  Time to take a road trip!

I figured that I should take advantage of my current latitude and enjoy a weekend at the beach!  When I asked Laura if she’d like to road trip with me, she said ,”Yes! Let’s go to the Gulf coast, Florida!  They call it the Redneck Riviera!”  The Redneck Riviera!?!?  Was that supposed to be a selling point?  I had only been to Florida once… when I was 14 and our family went to Disney.  It was an amazing trip but it firmly cemented a stereotype in my mind – Florida was full of retirees, Daytona Beach bikers and Disney fanatics.  (I’m pretty sure these stock photo retirees are on their way to Disney.)

Laura insisted that the panhandle was the best part of FL (besides the Keys!) and I’d be a fool not to drive down there with her.   It took up seven hours of our Friday, but it was worth it!  Highlights include: a rest stop with a real rocket ship, cows asleep in the shade, a CAMP license plate, pop up campers that looked like Hershey kisses, self-service ice houses and chocolate-covered graham crackers from Cracker Barrel! 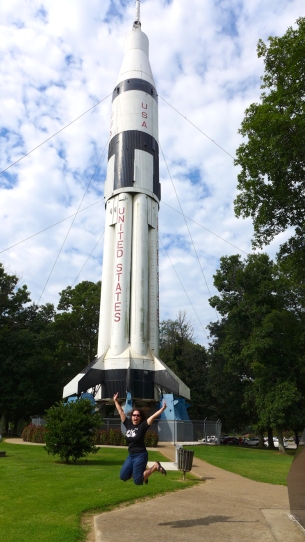 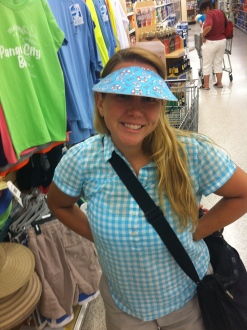 We stocked up on supplies and visors at Publix, then headed to St. Andrew’s State Park to set up camp!  Nice sites!

Once we were settled, we made grilled cheese, grabbed the kite and headed down to the beach to catch the sunset! 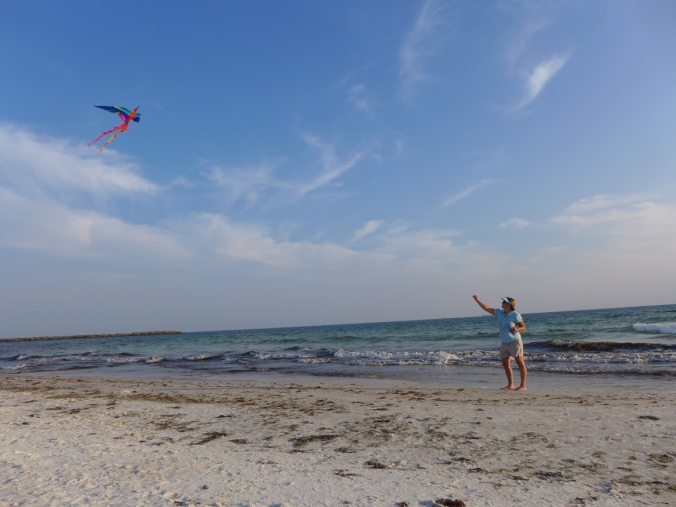 There was a pirate ship that cruised the shoreline.  We saw it again the next day, ‘firing’ its canons.

There was a neat Great Blue Heron just chilling on the beach.  We sat 20 ft away from him for almost an hour as the setting sun lit up the clouds. 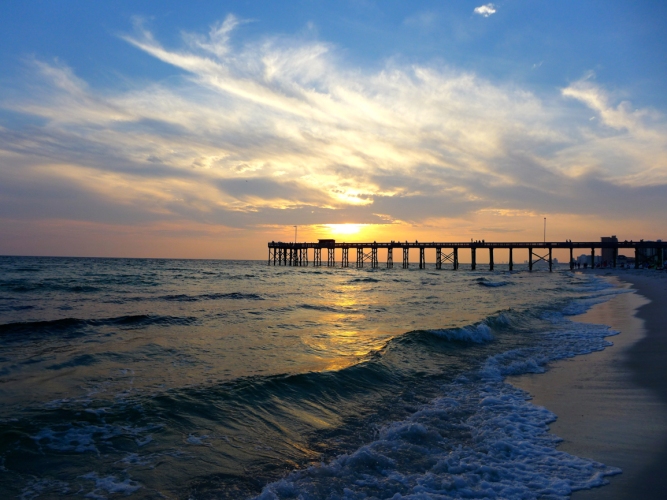 There was a nice breeze and it didn’t get too hot in the tent.  The next morning, Laura cooked up some breakfast, eggs and sausage.  (The palm-like underbrush gave the park a very tropical vibe.) 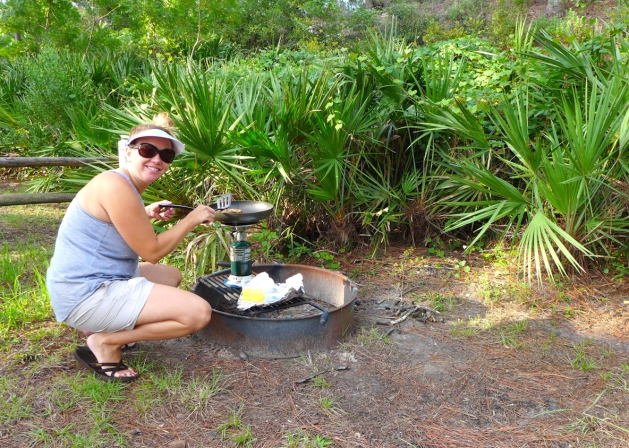 We decided to pay $20 to take a boat over to ‘Shell Island’ for the day.  Just finding out how to do that was quite the task since the brochure offered very little info… like where you buy tickets.  It took us 2 tries.

We learned there is no shade, no bathrooms & no services on Shell Island.  The ticket sale girls told us to pee in the ocean, that’s what the fish do!  Um, ok…  We had picked up a discarded umbrella from the beach the night before.  Off we go, the shuttle leaves every 30 minutes. 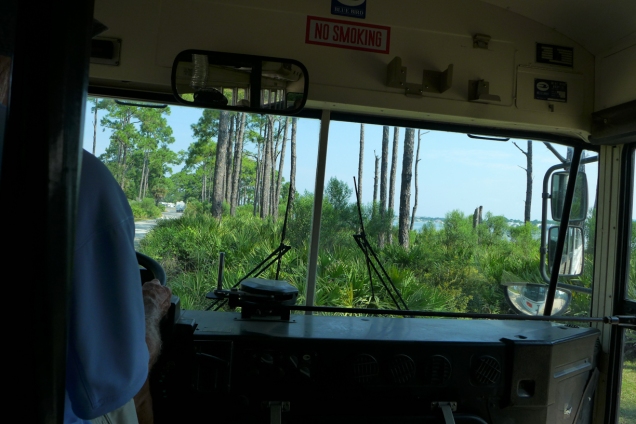 After 10 minutes wading through the sugar sand, we arrived at the beach!  (We were really glad we had decided not to bring along the cooler!)  This is a photo of the people flocking to the Ice Cream Boat! 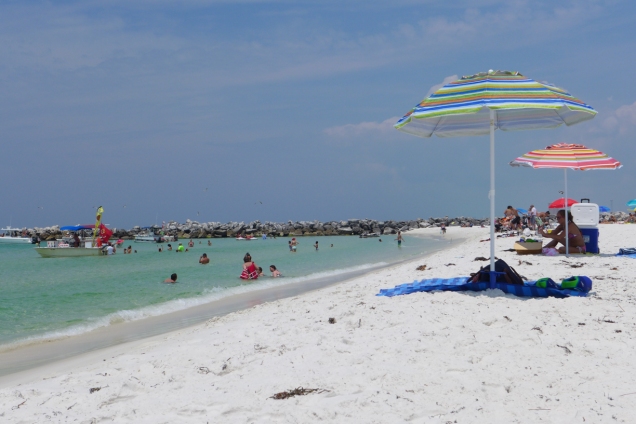 There was plenty of empty beach to claim- so we found a spot and set up our free umbrella.  Ahhh…

Laura had thought to bring goggles for both of us, so we swam down along the break wall to where the little tropical fish hang out in the rocks.  Then, we had ‘snack lunch’ and took the kite for a walk.

We spent six hours living the beach life on Shell Island, then headed back to camp.  Being at the beach all day had made us hungry for FISH TACOS!  We spotted this cute little place, right on the water. 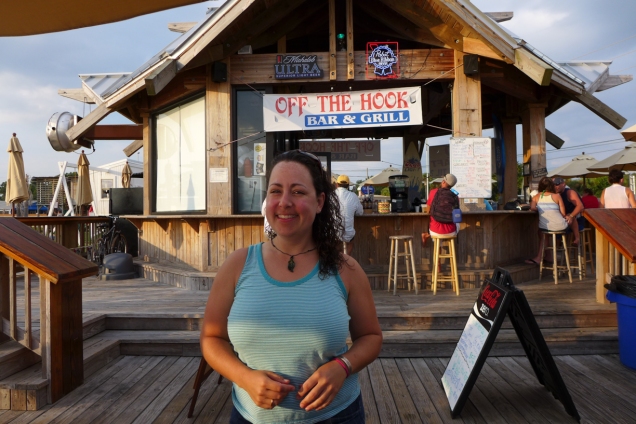 The fish tacos were pretty mediocre (cheddar cheese?!? Really?) but the view and the onion rings were on point! 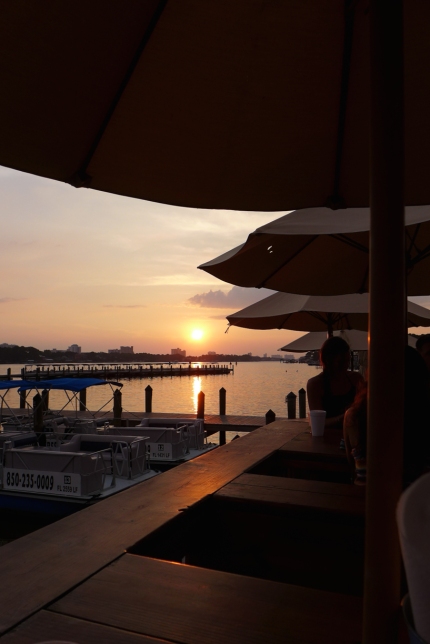 We decided to risk it and try to make it back to the beach for sunset again… but we just missed it.

Luckily, Laura is a marine-animal-magnet and she spotted a HUGE sting ray from the pier AND this adorable little turtle, chasing his dinner!  He swam along under the pilings, entertaining us with his cuteness, but it was getting too dark to get a clear photo.

We had to buy ice for the cooler, so of course we stopped by “EVERYTHING A DOLLAR” on the way.  The lady who works there makes hot glue ‘sculptures’.  Laura thought her sunglasses tan made her look like that cute little owl, so she bought him! 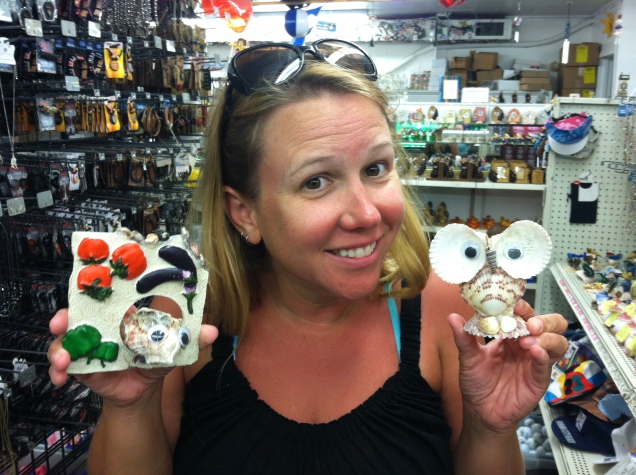 Sunday morning, we made friend egg sandwiches (Brilliant!) and tea, then packed up camp to drive to Destin.  The 2 state parks we had originally wanted to stay in are there, Topsail and Henderson.  As we drove between Panama City Beach & Destin, there were an intense number of giant hotels between the road and the beach.  A bit of a bummer, but they also had lots of public access points to make sure you could get to the water.

Lunch that day was donuts.  The Krueller was magical.  The Key Lime Pie donut was perfection.  The cream filled Long John was so sweet it made our teeth hurt.  Luckily, Laura had a half gallon of milk in the cooler.

We  stopped in Destin to get some caffeine to combat our OMG-we-ate-donuts-for-lunch sugar crash.  There is a big board walk with zip lines, airbrush stops and people coming in from fishing trips.  So many fish.   Look!  I found a pirate ship! 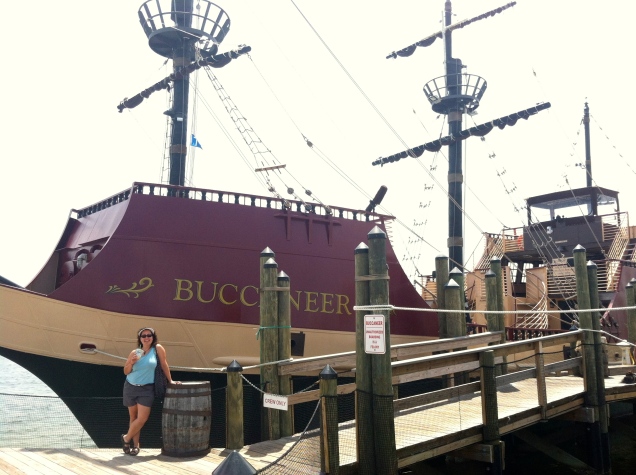 It was time to head home, but first- let’s get some more ice for the cooler!  This photo was taken 2 seconds before 20 lbs of ice plummeted into the cooler.  Luckily, I thought to take the eggs out before loading up.

We drove and drove… and we were still in Alabama when I remembered that it was 8pm and we hadn’t eaten dinner!  Tragedy! (Remember what we had for lunch?  Geesh.)  Like a food beacon, we saw a WAFFLE HOUSE at the next exit!  Our waitress, Trouble tolerated my request for UNsweetened tea and suggested the marinated chicken breast with hash browns.  It was awesome.

Thanks, Laura!  What an awesome trip.  That won’t be the last time I visit the Florida Panhandle. 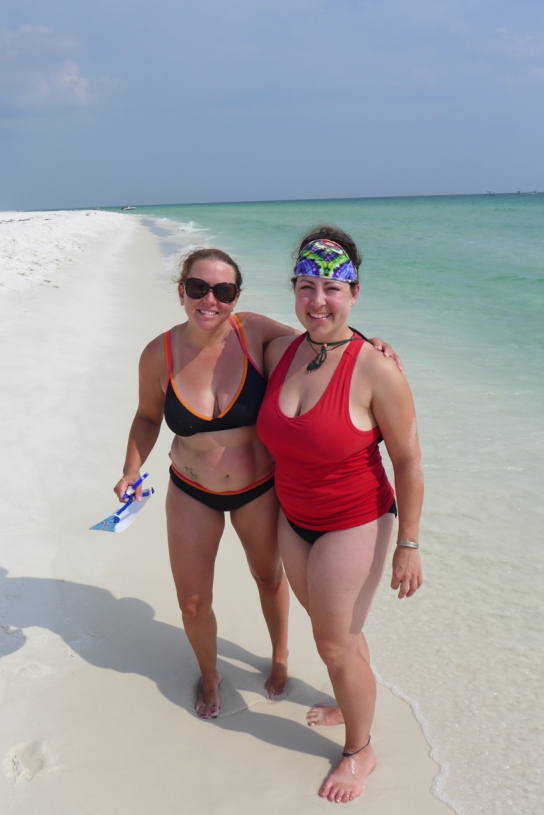