Whew! I’ve been off the grid for the past week, burning up 900+ miles in my Subaru and seeing some amazing sights! My friend Sarah Walters (from Gordonwood) has been ‘gifted’ with some free time so we decided to cruise the backroads of this gorgeous state and explore its National Park, forests and coastline!

Saturday we met up with Claire (Michigan Engineering girl who works for Mercedes-Benz) and caravanned to Crater Lake! After lunch and 5 hrs driving, we met up with Kitty Lucas (from St.Michael’s, Lansing).

Kitty had worked some magic and gotten her hands on the last campsite available on this (patriotic) holiday weekend so we made camp, grilled burgers and headed off for our first hike! We read a flier advertising a Sunset Hike up to Watchmens’ Tower with a Ranger @ 7:30pm, so we hopped in the week-old BMW (Thanks Claire!) and watched the sherbert-colored light bounce off the cliffs! And the water!!! Oh MAN!! The water was SO blue! Oddly blue. Totally fake blue. You really need to see it in person, but I’ll attempt to toss some photos in here to give you an idea. Wizard Island is actually a volcano, inside the remnants of a volcano. How meta. 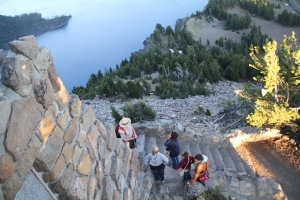 The next morning we watched the new “How Crater Lake was Formed” video at the Rangers’ station. There hasn’t been a new one made since 1980 and it had some really cool CGI video of Mt. Mazama blowing its top and creating the lake. Then we embarked on the “Rim Tour” 😉 a 33 miles drive around the perimeter of the lake. First stop, Phantom Ship- a cool outcropping of rock that looks like a… SHIP! Then we headed south to The Pinnacles. You can judge for yourself what they looked like. This photo is the PG version..

Then we hiked 1.1 miles from the rim of the crater to the LAKE! It was freezing cold but some people were jumping off the rocks into the blue water. 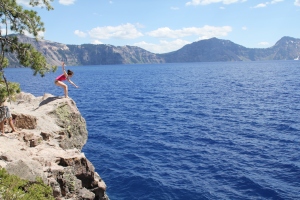 There were boat rides ($35) or you could take the boat out to Wizard Island and hike to the top for $10 more. We didn’t have enough time or $$$ to do either, but I would recommend that you hike the island. Kitty says it’s pretty epic. It took us 30 minutes of huffing and puffing to get back up to the top and then it was almost time to leave! 😦

We said goodbye and headed our separate ways. Sarah and I were on a mission to find Umpqua Hot Springs and thanks to a hand-drawn map gifted to us by a Lodge employee, we rolled into the parking lot with just enough light to set up camp and hike up to the natural tubs, scalloped along the edge of a cliff overlooking a river! Le Siiiigh.

The next day we meandered along Scenic Highway 138, stopping to cook Quinoa for our lunch at the edge of the Umpqua River, like good little hippies. Then we read books because we are also pretty nerdy. 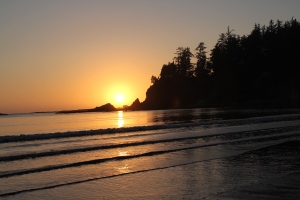 That night (After accidentally patronizing a TeaParty Pizza Shop) we caught the sunset at Sunset Bay! Perfection!

Up early the next morning for a tour of the TIDE POOLS! So cool!

Then we darted off up the 101 and crossed over lovely bridges and gasped at spectacular scenery. 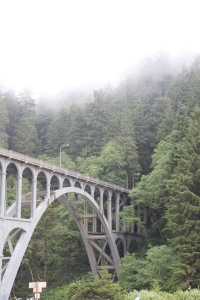 That night we camped near the beach AND near the aquarium in Newport! We spent the morning watching the otters get fed, the seals do tricks and walking thru the tunnel in the shark tank! JELLYFISH!!! 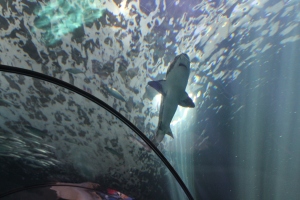 Sadly, we had to head home (so I could recover for my trip to Seattle this weekend. Grin.) ONE last stop in Lincoln City before heading inland towards Portland. Yelp found us some crispy, fresh FISH & CHIPS (the aquarium made us hungry) and we got them to-go and ate them on the beach, watching the kite-surfers. Great way to end a road trip. 🙂 But then, on the way home we stopped at Lawrence Gallery in Amity and saw 20+ Dali prints! They ranged in price from $4,000 to $360,000! Epic collection! They had already sold 9 pieces. Then we decided THAT was the best way to end a road trip and proceeded to get stuck in traffic… because you can’t drive anywhere on a highway here and NOT get stuck in traffic.