Erica was off this past week- a well earned break from Nursing school, before she begins her 10-week residency at the Pediatric ER. We knew that we wanted to explore Vancouver, BC & when I got a reply from a long-lost friend in Squamish we headed north. Monday we stopped in Seattle, saw the infamous Troll under the bridge and spent a few hours being overwhelmed by the tourists and the traffic near Pike's Place Market. 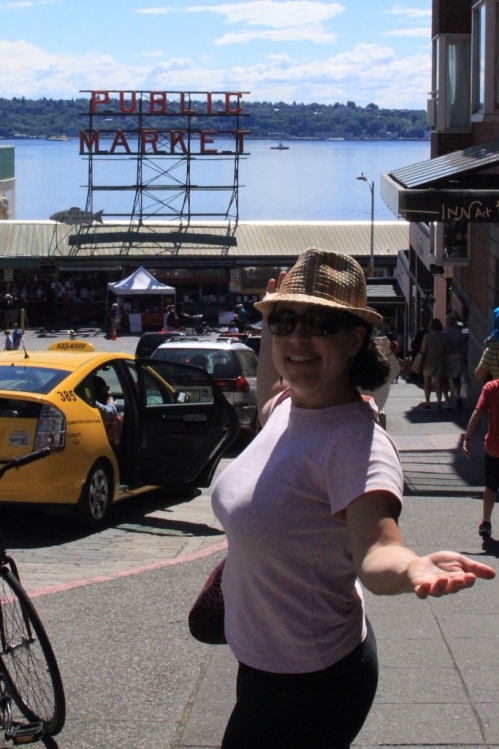 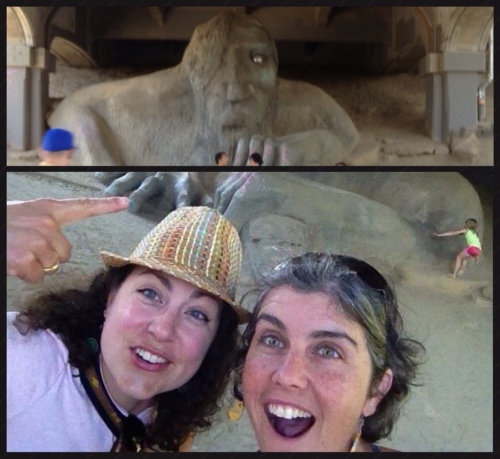 We headed north to Everett to hang with Kathryn (Erica's Doula friend) and have yummy beer at Skuttlebutt brew pub. We camped out on the floor of her studio apt and left in the morning, Mexican Chocolate Mocha in hand, to continue our journey.

We brunched with Erica's friend from boarding school and rolled into Vancouver for a picnic lunch on the beach!

We soaked up some rays and continued on- next stop; Stanley Island! Rolling through downtown Vancouver at rush hour gave us the chance to admire the tall buildings and pretty shops. Then we parked along the water and went to explore the island park. 10 minutes after leaving the car, I return to grab my wallet and find a parking ticket! There is no sign, no marking on the pavement that indicates a fee for parking! Grrrr. I spy a guy with a reflective vest nearby and accost him~ what can I do about this injustice?!?! He said it happens all the time and that I could go buy a parking pass now and then e-mail the city and tell them the story. Ok. (PS- It worked!!! I didn't have to pay!) 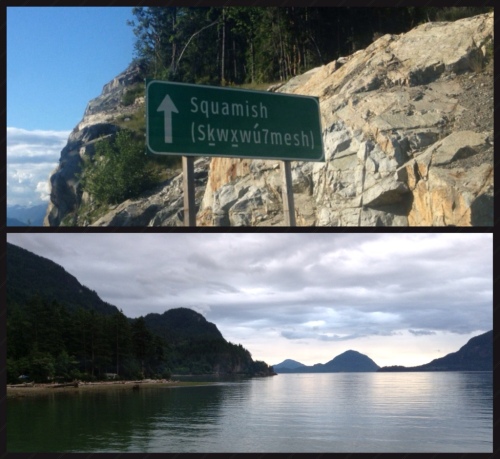 It's still Tuesday, we're still in Vancouver but I'm bound & DETERMINED to get to Squamish for the 7:30pm showing of STAND, a Eco/Oil documentary about a local guy named Norm who Stand-Up-Paddles (SUP) the proposed 350km oil tanker route through Howe Sound.

Here's the top 5 things I learned:

1- Norm has been SUPing through the Haida Gwaii islands for 10 years and has been adopted into a tribe.

2- Norm is an awesome athlete! He played on the Canadian Nat'l basketball team and is currently sponsored by Quicksilver.

3- Norm is having a baby with my Storer Camps friend, Jen Segger (she's insanely sporty- ie. she did a 6-day race across the Sahara Desert, she runs the Leadville 100, is on the DART- Nuun Adventure Racing Team and is sponsored by Salomon!) http://www.dartadventure.com/index.php/teamroster/22-jen-segger

4- The oil pipeline in the movie is being proposed by Enbridge Oil, who you might have heard of when one of their pipelines spilled 1 million gallons of oil into the Kalamazoo River in Michigan. That was almost 3 years ago and they are still cleaning it up. http://insideclimatenews.org/news/20130128/dilbit-6B-pipeline-kalamazoo-river-enbridge-oil-spill-michigan-keystone-xl-epa

5- SPIRIT BEARS! They are cream-colored Black bears, born only in this coastal area of British Columbia! They are one of the non-aquatic species who would be affected by a potential oil spill. Since the Hecate Strait is more treacherous to navigate than Prince William Sound (where the Exxon Valdez crashed) everyone who lives in the area is worried that a spill is more a “when it happens” versus “if it happens” kind of thing.

After the show, Erica and I headed to Alice Lake to set up camp. The sun went down after 9:30pm so we made it down to the lake just as it got dark and watched the bats darting low over the water. 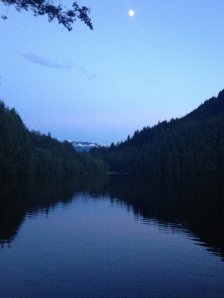