Wednesday AM, Jen rolled up to our campsite on her bike and took us for a swift hike around the lake. Then she told us to go hike The Chief (see above) which she did 3 days a week until her 2nd trimester! Well… she described it as “an hour of nearly vertical hiking” and she does not exaggerate! I am not an 'uphill' kind of girl and this hike was epically hard. (Jessie- it was reminiscent of that volcano we hiked in Antigua when the guide kept offering me a horse. Ugh.)

The last bit involved dragging myself up a rock slab with some chains they has bolted into the wall! Then, I wedged myself into a crack and just when I thought I was almost done… a ladder. Oh geez. But the view? It was TOTALLY WORTH IT! Howe Sound on my left, logging industry stuff in the middle and Squamish on my right. Glorious!

This hike was H-A-R-D! It seems unlikely that Shroooooms would have made it easier…

Next, we hopped in the car for some well-deserved 'sitting' time on the way up to Whistler. Jen had worked/trained there for years and some of the 2010 Winter Olympics took place there as well. It was nice. Too nice. It had that slightly eerie, pre-fabed feeling that Vail and Beaver Creek have. Don't get me wrong, we dug it. We sat slope-side and ate a $18 burger while we watched the bikers bomb down the hill, spraying mud everywhere. That was cool. Also, we were watching the Stanley Cup & drinking Kokanee (for Ron)!

We also happened upon a post-race celebration put on by the staff… who were drunk, dressed in drag and dancing to a live Calypso band. Not much to do in the off-season… 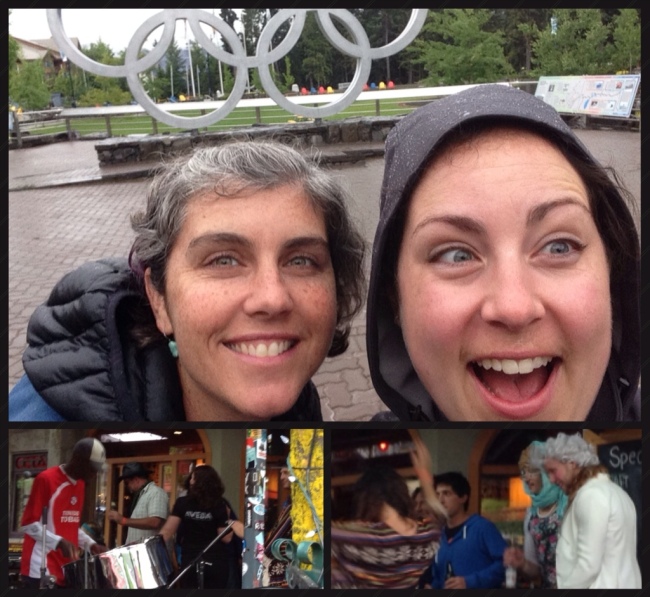 We decided to head down to Vancouver to camp that night since we'd have a long drive the next day, so we turned the Subaru towards the Sea-to-Sky highway and headed south.

The road is gorgeous plus we spotted a black bear, foraging for berries! We made it to Porteau Cove by 9pm and enjoyed the view of the sound but didn't camp because it cost $38 and was 10meters from a train track! So we ask the ranger if he has any suggestions for a campground closer to 'The Couv'? He started us on a crazy/late night/campsite hunt with his super-vague answer. But Wed night we camped in Burnaby and got up stupid early on Thursday to high tail it home.

Thursday: we explored Grandville Island (great!), I discovered that I am a lifetime member of the Canadian version of REI (MEC), and we ate breakfast sandwiches on homemeade veggie biscuits in Gastown! Then we spent 2+ hours stuck in 3pm? traffic outside of Seattle. Blerg. The 2 positive things that came out of it were: 1- I bought a pop @ BK's and got to use a touch screen pop machine and 2- I figured out what I want to do for a job! This is a revelation that requires a whole post of its own, so you'll just have to wait. 🙂