Ahhh! The days have been sweltering, but the nights are cool & breezy. Driving home from yoga class @ 9:15pm, I noticed that it was mostly dark out! The sunshine hours are receding towards fall and I recalled that I was half-way through my summer in Portland! In 5 short weeks, Doug & Eric will be arriving by plane to drive me back to Michigan where I will spend the week zipping around the state, hugging people. THEN I'll be on a plane to Amsterdam! THAT is a whole other post…

May 17th= Belated Birthday present from Luke & Susie! (Michael arrives!) Lots of parties and good-byes, chalk drawing with B, then Dad & I road-trip to Colorado!

2 more days driving with Dadoo, “Shields UP!” (he says this when we go thru tunnels & we think its hilarious)

JUNE is full of fun touristy times ~ first via bike-map with dad, then with Erica! Zip-lines, brunch, REI garage sale, eating at food trucks, white water rafting, Saturday Market/kidnapping/Voodoo donut, Pride Week Bingo AND a road trip to Vancouver BC, up the most beautiful highway in the world, to Squamish! On the way home, I start Adrienne Lee Photography. We see Old Crow Medicine Show @ the Zoo. Then, Erica starts her residency at the pediatric ER & I dog-sit in Sellwood where a pen gets eaten and poo turns blue.

JULY! The most important week of July was covered in the last post; Crater Lake road trip! And then a weekend in Seattle with Becca! Also, I have been going to yoga twice a week and working HARD to learn how to set up my website for my photo business. Which is good, since I got laid off from my nannying job.

Now that I've got a decent looking website ( http://www.adrienneleephoto.com) I'm going to do a few photo shoots with friends in the area and add a blog feature to my website. Everything's slowing coming together! 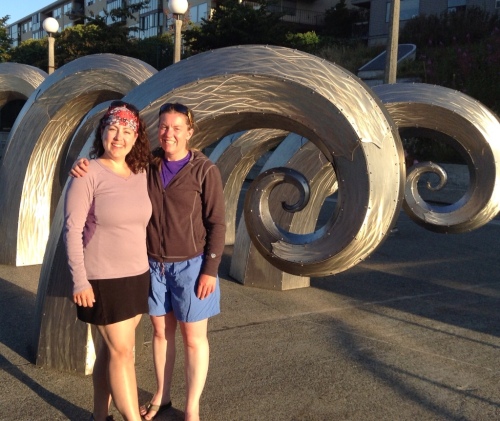 Erica was off this past week- a well earned break from Nursing school, before she begins her 10-week residency at the Pediatric ER. We knew that we wanted to explore Vancouver, BC & when I got a reply from a long-lost friend in Squamish we headed north. Monday we stopped in Seattle, saw the infamous Troll under the bridge and spent a few hours being overwhelmed by the tourists and the traffic near Pike's Place Market.

We headed north to Everett to hang with Kathryn (Erica's Doula friend) and have yummy beer at Skuttlebutt brew pub. We camped out on the floor of her studio apt and left in the morning, Mexican Chocolate Mocha in hand, to continue our journey.

We brunched with Erica's friend from boarding school and rolled into Vancouver for a picnic lunch on the beach!

We soaked up some rays and continued on- next stop; Stanley Island! Rolling through downtown Vancouver at rush hour gave us the chance to admire the tall buildings and pretty shops. Then we parked along the water and went to explore the island park. 10 minutes after leaving the car, I return to grab my wallet and find a parking ticket! There is no sign, no marking on the pavement that indicates a fee for parking! Grrrr. I spy a guy with a reflective vest nearby and accost him~ what can I do about this injustice?!?! He said it happens all the time and that I could go buy a parking pass now and then e-mail the city and tell them the story. Ok. (PS- It worked!!! I didn't have to pay!)

It's still Tuesday, we're still in Vancouver but I'm bound & DETERMINED to get to Squamish for the 7:30pm showing of STAND, a Eco/Oil documentary about a local guy named Norm who Stand-Up-Paddles (SUP) the proposed 350km oil tanker route through Howe Sound.

Here's the top 5 things I learned:

1- Norm has been SUPing through the Haida Gwaii islands for 10 years and has been adopted into a tribe.

2- Norm is an awesome athlete! He played on the Canadian Nat'l basketball team and is currently sponsored by Quicksilver.

3- Norm is having a baby with my Storer Camps friend, Jen Segger (she's insanely sporty- ie. she did a 6-day race across the Sahara Desert, she runs the Leadville 100, is on the DART- Nuun Adventure Racing Team and is sponsored by Salomon!) http://www.dartadventure.com/index.php/teamroster/22-jen-segger

4- The oil pipeline in the movie is being proposed by Enbridge Oil, who you might have heard of when one of their pipelines spilled 1 million gallons of oil into the Kalamazoo River in Michigan. That was almost 3 years ago and they are still cleaning it up. http://insideclimatenews.org/news/20130128/dilbit-6B-pipeline-kalamazoo-river-enbridge-oil-spill-michigan-keystone-xl-epa

5- SPIRIT BEARS! They are cream-colored Black bears, born only in this coastal area of British Columbia! They are one of the non-aquatic species who would be affected by a potential oil spill. Since the Hecate Strait is more treacherous to navigate than Prince William Sound (where the Exxon Valdez crashed) everyone who lives in the area is worried that a spill is more a “when it happens” versus “if it happens” kind of thing.

After the show, Erica and I headed to Alice Lake to set up camp. The sun went down after 9:30pm so we made it down to the lake just as it got dark and watched the bats darting low over the water. 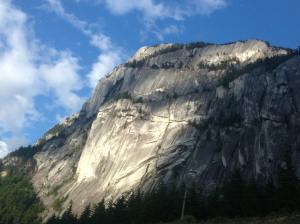 Wednesday AM, Jen rolled up to our campsite on her bike and took us for a swift hike around the lake. Then she told us to go hike The Chief (see above) which she did 3 days a week until her 2nd trimester! Well… she described it as “an hour of nearly vertical hiking” and she does not exaggerate! I am not an 'uphill' kind of girl and this hike was epically hard. (Jessie- it was reminiscent of that volcano we hiked in Antigua when the guide kept offering me a horse. Ugh.)

The last bit involved dragging myself up a rock slab with some chains they has bolted into the wall! Then, I wedged myself into a crack and just when I thought I was almost done… a ladder. Oh geez. But the view? It was TOTALLY WORTH IT! Howe Sound on my left, logging industry stuff in the middle and Squamish on my right. Glorious! 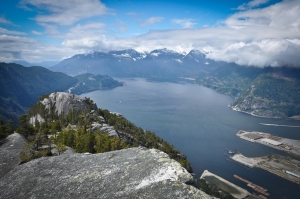 This hike was H-A-R-D! It seems unlikely that Shroooooms would have made it easier…

Next, we hopped in the car for some well-deserved 'sitting' time on the way up to Whistler. Jen had worked/trained there for years and some of the 2010 Winter Olympics took place there as well. It was nice. Too nice. It had that slightly eerie, pre-fabed feeling that Vail and Beaver Creek have. Don't get me wrong, we dug it. We sat slope-side and ate a $18 burger while we watched the bikers bomb down the hill, spraying mud everywhere. That was cool. Also, we were watching the Stanley Cup & drinking Kokanee (for Ron)! 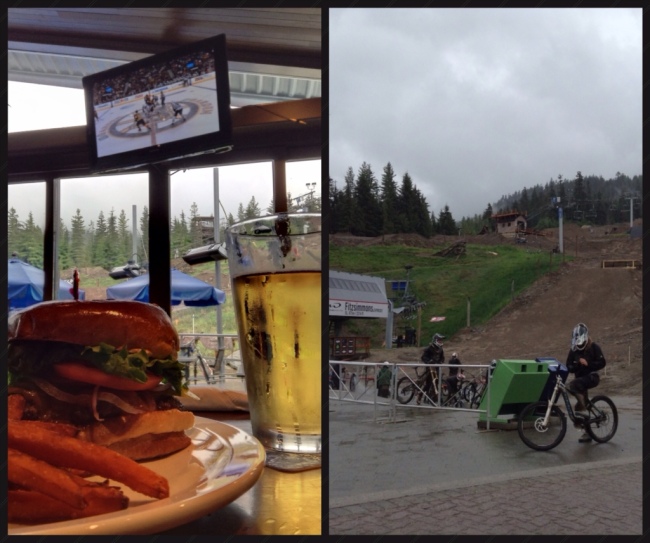 We also happened upon a post-race celebration put on by the staff… who were drunk, dressed in drag and dancing to a live Calypso band. Not much to do in the off-season…

We decided to head down to Vancouver to camp that night since we'd have a long drive the next day, so we turned the Subaru towards the Sea-to-Sky highway and headed south. 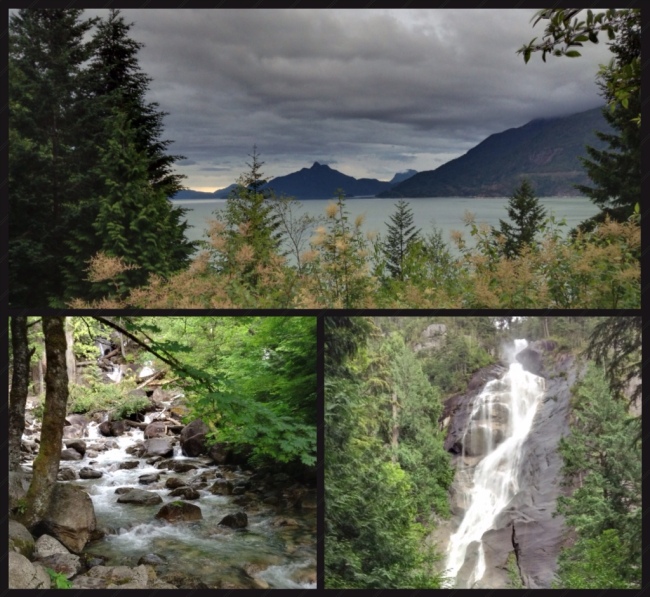 The road is gorgeous plus we spotted a black bear, foraging for berries! We made it to Porteau Cove by 9pm and enjoyed the view of the sound but didn't camp because it cost $38 and was 10meters from a train track! So we ask the ranger if he has any suggestions for a campground closer to 'The Couv'? He started us on a crazy/late night/campsite hunt with his super-vague answer. But Wed night we camped in Burnaby and got up stupid early on Thursday to high tail it home.

Thursday: we explored Grandville Island (great!), I discovered that I am a lifetime member of the Canadian version of REI (MEC), and we ate breakfast sandwiches on homemeade veggie biscuits in Gastown! Then we spent 2+ hours stuck in 3pm? traffic outside of Seattle. Blerg. The 2 positive things that came out of it were: 1- I bought a pop @ BK's and got to use a touch screen pop machine and 2- I figured out what I want to do for a job! This is a revelation that requires a whole post of its own, so you'll just have to wait. 🙂