The magic of a package tour vacation is that someone else finds the places you will visit & figures out how to get you there. Solo traveling is always less expensive.  Unfortunatey, you spend a lot of time weighing the options.

Boat vs Bus vs Plane?  What will it cost?  How long it take?  How comfortable will it be?

After gathering all the information, you make a choice and cross your fingers that the weather/government/seat mate/break-down doesn’t ruin you trip.

“Oh, did you want to drive on this road? Sorry, it’s not done yet!”

After Kate & I had our fill of the ancient ruins & street harassment of Siem Reap we needed to figure out how to get to Phnom Penh.

Here is the Bad Decision we made…

After weighing the options for transport from Siem Reap to Phnom Penh Kate & I decided that a night bus would save us time and money- since we wouldn’t need a hostel that night! We purchased $15 tickets for the Giant Ibis Luxury O/N bus. The bus had an upper & lower double rows of ‘beds’- so if you didn’t reserve both seats, you’d end up sleeping next to a stranger all night. (Tip: The lower row didn’t have any air vents…) 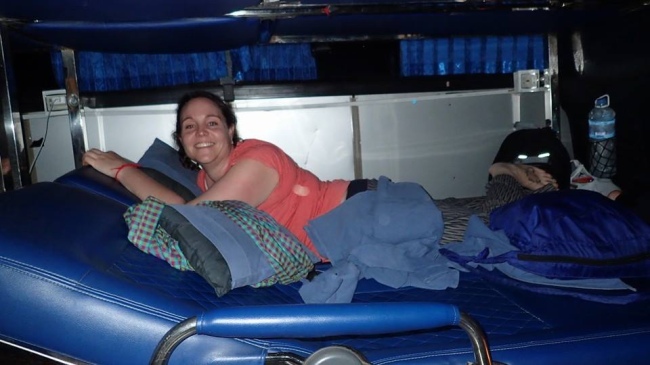 These photos were taken BEFORE we began our journey and were entertained by the novelty of a bus with a bed.  It was also BEFORE we realized that 2/3 of the 9 hr journey would be on washboard dirt road and we would bounce & slide around in our seats all night. We were excited about the journey… then I had to buckle myself down to avoid getting tossed into the aisle.

After a loooong sleepless night we arrived in PP at 6am in a grouchy fog and were deposited into a swarm of ambitious Tuktuk drivers. We were NOT interested in being pestered so we just started walking, we knew where our hostel was located. It was 6am and a stroll along the Tonlé Sap River seemed relaxing since it wasn’t insanely hot yet.

60 minutes later we arrived at the Royal Palace!

Our hostel should be a few blocks from the palace (Google maps is dumb) but we spent the next 30 minutes overshooting our mark and finally flagged down a Tuktuk driver who charged us $2 to drive 3 blocks to our hostel tucked down an alleyway. It was worth it.

Luckily, when we arrived at ‘Me Mate’s Villa’ we liked it so much we stayed a whole week! ($5/night!)